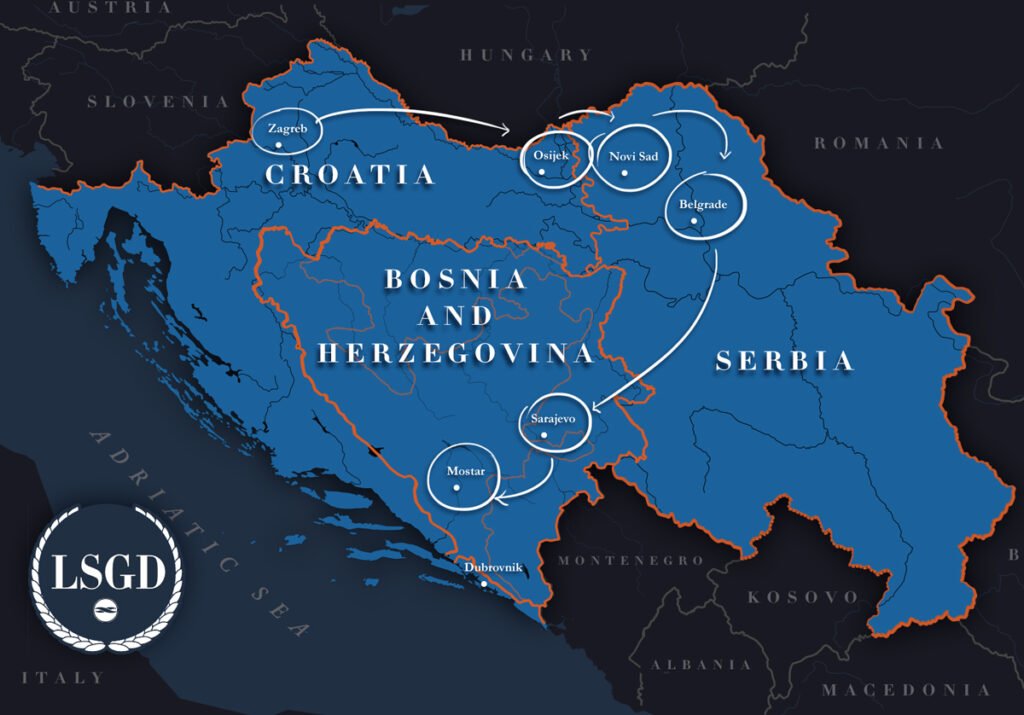 Arrival at Zagreb airport and transfer to your hotel with your English-speaking driver. Enjoy time at leisure or venture out on your own and start exploring the city. In the early evening meet and greet your tour manager in the hotel lobby and head out for a very special welcome dinner of typical dishes accompanied by a Croatian folklore performance to immerse yourself into Croatia’s colorful heritage. (D)

This morning, meet your licensed guide who will show you this gorgeous city and how to explore it like a local. Stroll the open-air market and enjoy the ambiance of the Upper Town. View the St. Mark’s Church with its colorful roof, and the Parliament, and then pass through the Stone Gate of appreciation. Sit down for a cup of coffee or tea on Tkalciceva Street. Later on, explore the lower city, the main Jelacic square and the lovely Zrinjevac park area. Your afternoon is at leisure to choose between the many museums and attractions to visit. Zagreb is known as the city of museums as it has the largest number of museums per capita in Europe. (B)

Today we depart Zagreb and head toward the Eastern parts of Croatia, a hidden gem yet to be discovered by travelers. We arrive in the Baranja region just in time for lunch! We will visit the charming ethno-village Karanac, a completely restored settlement of rural households. An authentic lunch will be served in a fairy-tale restaurant, part of an excellent local winery. The restaurant and wine tasting room are decorated in an eclectic style that integrates traditional rustic elements with contemporary design. Later, we proceed to Osijek and take a short, orientational walking tour where we will be introduced to magnificent art nouveau-style buildings on the European Avenue. The rest of the day and evening are at leisure for you to explore on your own or relax. (B, L)

Today after check out we head to Vukovar, a beautiful baroque city that unfortunately was completely destroyed in the 90’s Independence War following the downfall of Yugoslavia. We will visit some of the most important sights that mark the largest battle in Europe after World War II. Later, we will visit the completely renovated baroque city center. You will have some free time to grab a bite before we cross the border into Serbia to arrive in Belgrade, its capital city. Serbia is well known for its outstanding hospitality. Here we will savor dinner at a local restaurant so be prepared for delicious food, and make sure to come hungry! (B, D)

Today after breakfast we get an early start to explore this fabulous city. Our local guide will take us to the imposing Kalamegdan Fortress situated at the juncture of the Danube and Sava rivers. We will see Republic Square, the popular Mihajlova Street as well as the Church of Saint Sava, the largest Orthodox church in the city. The tour concludes with a visit to Tito’s Memorial. Tito was the beloved president of former Yugoslavia, the person who was able to hold together in harmony six different nations, six languages, and three religions. He was a charismatic leader and also very active internationally, respected and loved by politicians and royalty worldwide. He was the one who established good relations with the United States. Tito was dearly mourned after his death—four kings, six princes, 31 presidents, 22 prime ministers, and 47 ministers of foreign affairs attended his funeral. We will learn about his life, leadership, and vision during our visit to the memorial. The afternoon and evening are free to explore on your own or relax.  (B)

Today is dedicated to exploring more of Serbia. First, we will stop in Fruska Gora, an area well known for monasteries and wineries. Our first tour will be the 16th-century Krusedol, considered the most beautiful monastery of Fruska Gora. We then proceed to Sremski Karlovci, a town with great significance in Serbian history, where the Sremski Karlovci treaty was signed to prevent the Ottoman empire from advancing further into Western Europe. We will see the Four Lions Fountain, and visit the Nicola’s Orthodox Cathedral. Our day of learning Serbian history and heritage will continue with a visit to the iconic Petrovaradin Fortress which overlooks Novi Sad from a cliff above the Danube River. This Fortress is often called the Gibraltar of the Danube, and it took 88 years to be built. Later on, we cross the river into Novi Sad, the second largest city in Serbia and administrative center of the Region of Vojvodina. We will take a walk in the old quarter, Stari Grad, to see the Gothic Revival Name of Mary Church, and the neo-Renaissance City Hall. We will have lunch at a local restaurant before visiting the Novi Sad Synagogue and the city center. Here you will have some free time to venture on your own and explore at your own pace. The return to Belgrade is planned for late afternoon. Your evening in Belgrade is at leisure. (B, L)

This morning we say goodbye to Belgrade and Serbia, and we will enjoy the ride through the Serbian countryside before we reach the border of Bosnia and Herzegovina. With stops along the way, we arrive in Sarajevo, the capital of Bosnia and Herzegovina, just in time for lunch at a traditional restaurant. Later on, we will explore this unique city, often called “the Jerusalem of Europe,” with a walking tour. The city has been home to Orthodox and Catholic Christianity, Islam, and Judaism for centuries. We start with Bascarsija Square and the famous Sebilj fountain. Later we move on towards Kazandziluk Street (Coppersmith’s Street), the burned library, and hear the stories about the two Yellow and White Fortresses. We continue our walk to view several beautiful bridges, and many other interesting buildings and sites. The rest of the day is at leisure.  (B, L)

This morning we will travel through the hills of Bosnia and arrive at Mostar, home to the iconic bridge that divided the Christian and Muslim areas of town. The bridge was torn down in the 90’s war, but was restored afterward to its previous glory. We will enjoy a tour of the city, visit the Mosque of Mostar, and a traditional Turkish House. You will have plenty of free time to have lunch on your own, wander the streets, check out the local artisan shops, or just relax with a cup of Turkish coffee. Later, we will head toward the Krvavice Waterfalls to admire the dramatic surroundings of this thundering waterfall system, which towers up to 80 feet. In the later afternoon hours, we will arrive in Croatia again and settle down in our hotel in Dubrovnik. (B)

Today you will be transferred to the airport for your homebound flight. (B)

Or, choose to stay in Dubrovnik a few additional days to enjoy and explore the surroundings, OR join the tour “Local Life of South Dalmatia” and stay with us another week for an immersive experience of the Southernmost parts of Croatia and the beautiful Island of Hvar.